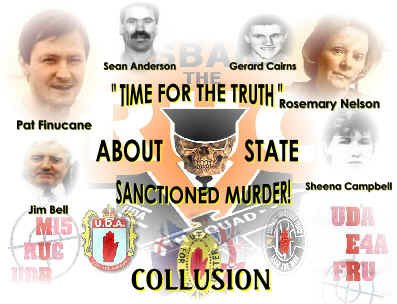 A decision to broadcast the allegations of a rogue, murderous ex-RUC officer has prompted the detectives who brought him to justice to speak out for the first time.

His arrest and successful conviction came about after senior police suspected that a small number of serving officers in the Armagh area were collaborating with UVF killers operating across the Mid Ulster area.

The shocking revelation led to an unprecedented RUC investigation – bringing together the best detectives from across Northern Ireland in total secrecy to identify and prosecute those involved.

The subsequent investigation led to five officers facing serious charges up to and including murder.

Two of the detectives involved spoke to the News Letter after learning that a major broadcaster was prepared to show the film Unquiet Graves, directed by Sean Murray – son of senior Sinn Fein Strategist and former IRA prisoner Sean ‘Spike’ Murray.

The film gives a platform to Weir who – among other unsubstantiated claims – alleges British security agents encouraged the UVF to carry out mass murder at a Catholic primary school. Weir has also alleged that a large number of his former RUC colleagues were involved in terrorist activity.

However, the detectives who brought him to justice find it incredible that Weir would have declined to divulge this information – or the claim that he was working under orders from a higher authority within the security forces – at the time to avoid a life prison sentence.

Although Weir was eventually sentenced for the Strathearn murder in 1980, it would be almost 20 years before he would accuse many of his former colleagues of serious criminality.

“Why didn’t Weir take the opportunity to say all this stuff at Castlereagh because it could have saved his bacon?” one of the ex-officers said.

The former detective sergeant (DS) – who does not wish to be named – said it was unthinkable that Weir would have remained silent if his claims were even partially true.

“At the very least he have been able to do some kind of deal [for a lesser sentence]. That was the opportunity for Weir to use whatever intelligence he had in order to ease his own position.”

The ex-DS described the police operation to bring what was later dubbed the ‘Glenanne Gang’ to justice in 1978 as “the biggest interviewing team ever put together by the RUC”.

He said: “When the briefing came that morning we were told that these were police officers being arrested for murder. You could have knocked us down with a feather.

“He had the opportunities at the time of his arrest, and when he was being interviewed, to make all of those allegations, but he didn’t.

“I would be satisfied, from my role at Castlereagh, that none of that material he has talked about in his depositions, and in his interview with Liam Clarke, had been talked about. And if it had been, it would have been followed up. There is no question about that.

“I look back on that investigation, and that was one of the most thorough and intense investigations ever to have been carried out at that stage.”

Commenting on the persistent criticism that UVF leader Robin Jackson was not arrested every time intelligence reports linked his name to a particular terrorist attack, the former detective said it was well-known that Jackson always refused to talk unless there was concrete evidence to put to him.

“It was usually a waste of time. All we were doing by arresting Jackson without hard evidence was educating him. Letting him know what intelligence we had and, more importantly, what we didn’t know,” he said.

A second former officer, who was a detective inspector (DI) involved in the investigation has a clear recollection of the events surrounding Weir’s arrest and conviction.

“He was caught up in this ‘loyalist’ thing with [William] McCaughey and [Gary] Armstrong and those boys. They were working in the SPG (Special Patrol Group) and they were seeing policemen being murdered and kidnapped and they took the law into their own hands. That’s basically what they did,” he said.

“Nobody directed them to do it. Had there been then they wouldn’t have been charged and put in jail for life.

“I was part of the investigating team that was responsible for convicting them.

“I was given a brief to arrest Sergeant Gary Armstrong at his house in Armagh, so we went down to arrest him under the Prevention of Terrorism Act,

The former DI added: “So we went down to his house, and there was a birthday party for one of his children going on in the house at that time and there were about 12 kids there.

“It was quite a traumatic thing, because you were arresting the father in front of all these children…but we arrested Armstrong and took him to Castlereagh.

“McCaughey’s mother and father had also been arrested and they were all in Castlereagh.”

In the 1999 Liam Clarke article, the journalist reported: “Weir, alone of the three members of the group interviewed for this article, seemed to have believed he had outside protection and approval.

“McCaughey said, ‘I knew I had no backing. If I had backing, I would have done far more. I was worried sick about being caught. I knew I would be jailed and I was drinking very heavily through stress.’”

With many thanks to the: Belfast News Letter and Mark Rainey for the original story.