A NEVER before seen picture of hunger striker Bobby Sands at a rally along with republican Máire Drumm is to be included in a new book about the Sinn Féin  vice-president.

Born in the village of Killeen, Co Armagh, the mother of five was gunned down in cold blood on October 1976 by cowardly gunmen dressed as doctors as she lay in her hospital bed in the Mater Hospital in North Belfast where she was recovering from a major operation. The attack was claimed by the Red Hand Commando, a cover name that was used by the UDA. An commemorative event took please in South Armagh, on what would have been her 100th birthday. A book about her life by former Sinn Féin president Gerry Adams will also be launched.

It contains a previously unseen photograph taken at a Sinn Féin rally on August 8th 1976, two months before she was murdered at the age of 57. Well-known for her defiant speeches at rallies and in courtrooms, she was jailed twice and spent time in Armagh Prison.

Gerry Adams said in the years since her death Máire Drumm “has become an iconic figure in Irish Republicanism”. “Her leadership qualities and her enormous courage led to her being elected as vice-president.” The commemoration started at McKevitt’s petrol station at 7.3opm and was followed by a wreath laying ceremony.

With many thanks to: The Irish News and Allison Morris for the original story 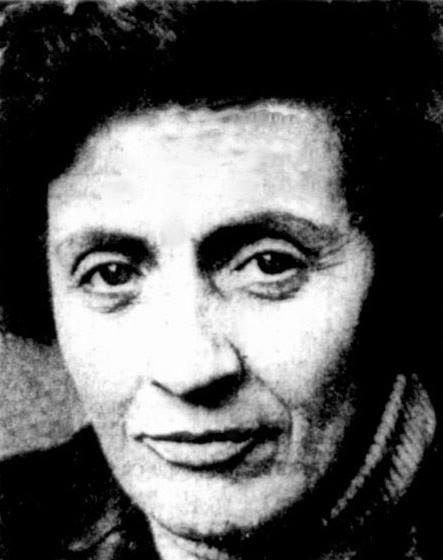 Máire Drumm (née McAteer), was born in the townland of Killeen, South Armagh, on 22 October 1919 to a staunchly republican family. Máire’s mother had been active in the Tan War and the Civil War.

In 1940, Máire joined Sinn Féin in Dublin. In 1942, she moved to Belfast, which became her adopted city and she continued her republican activities. Every weekend, Máire would carry food parcels to the republican prisoners in Crumlin Road Jail and it was here that she met Jimmy Drumm, who she married in 1946.

When the IRA renewed the armed struggle in the late 1950s, Jimmy was again interned without trial from ’57 to ’61. 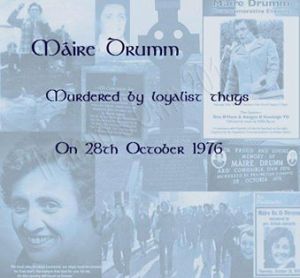 Máire became actively involved in the Civil Rights Movements of the 1960s. She worked tirelessly to rehouse the thousands of nationalists forced from their homes by unionist/loyalist pogroms.

During her work as a Civil Rights activist, Máire emerged as one of the Republican Movement’s most gifted leaders and organisers. Máire was the first to warn that the British troops sent in as “peace keepers” were a force of occupation. Máire was a dynamic and inspirational speaker. Once, when addressing a rally in Derry after the shooting of two men from the city, Máire said:

“The people of Derry are up off their bended knees. For Christ sake stay up. People should not shout up the IRA, they should join the IRA.”

In 1972, Máire became Vice President of Sinn Féin. Due to their dedication to the republican struggle, Máire’s family was continuously harassed by the RUC, British Army and by loyalist intimidation. The British Army even constructed an observation post facing their home in Andersonstown. At one point, her husband and son were interned at the same time. Her husband, Jimmy became known as the most jailed republican in the Six Counties. Máire was also jailed twice for ‘seditious’ speeches, once along with her daughter.

In 1976, her eyesight began to fail and she was admitted for a cataract operation to the Mater Hospital, Belfast. On 28 October 1976, as Máire lay in her hospital bed, loyalist killers wearing doctors white coats walked into her room and shot her dead.

Máire Drumm, freedom fighter and voice of the people, was buried in Milltown Cemetery. One of her most famous quotes was:

“We must take no steps backward, our steps must be onward, for if we don’t, the martyrs that died for you, for me, for this country will haunt us forever.”

With many thanks to: Easter Rising War of Independence and Irish Civil War History. 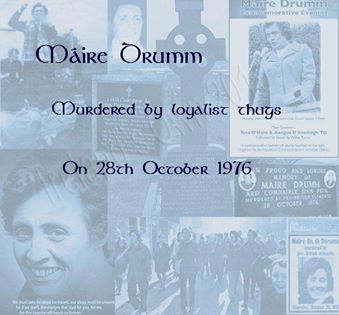 On the 28th November 1976, Máire Drumm Vice President of Sinn Féin and a commanding officer in Cumann na mBan, was assassinated by loyalists while recovering in Belfast’s Mater Hospital in North Belfast.