A FORMER RUC chief constable “failed to act” when he was “quite probably”aware of a plot to murder one of his own Catholic officers, a damning report has found.

The murder of sergeant Joe Campbell – who was gunned down as he left a Co Antrim police station – was one of the most controversial killings of the Troubles. The father-of-eight was hit by a single high velocity shot to the head as he closed the main gates of Cushendall RUC police station on February 25 1977. Sgt Campbell’s family believe his murder involved collusion between rogue elements of the police and loyalist paramilitaries. In his report yesterday Police Ombudsman Dr Michael said evidence of collusion was “inconclusive” but concluded the death was “preventable”. He said there was “sufficient, reliable evidence” that the then head of Special Branch and “quiet probably the chief constable were aware of concerns, which had been documented, about the threat to his life and failed to act upon them”. The RUC chief constable at the time of the murder was Sir Kenneth Newman, a former Metropolitan Police commissioner now aged 87. He told Dr Maguire’s investigators he had no recollection of the Sgt Campbell case. In a statement yesterday the murdered man’s widow Rosemary said she was unhappy with the report, which has taken 12 years to complete, “because it does not contain the full account of the murder which I had hoped for.” Sgt Campbell’s son Tommy insisted the findings amounted to “collusion”. “If you read the report what other conclusions can you come to…. Senior officers…. decide that it’s not worth their time to stop the murder of one of their colleagues what more stark definition of collusion could you get.” RUC/PSNI Deputy Chief Constable Alistair Findlay said the report “makes difficult reading”.

The Police Ombudsman Michael Maguire said: “On the basis of the information available I can neither discount nor substantiate the allegations of a wider conspiracy into the murder of Sgt Campbell,” he said. When asked last night who was head of RUC Special Branch at the time the PSNI said it was “unable to provide that information”. However, The Irish News can reveal the man who headed the secret department was Mick Slevin who has since died. Sgt Campbell’s death sent shockwaves through the small seaside village which until that point had been relatively untouched by the Troubles. He is believed to have been gunned down by notorious UVF gunman and security force agent Robin Jackson who was associated with the infamous Glenanne gang. The report reveals that senior RUC officers were warned by concerned Special Branch members that Joe Campbell was under threat but they did not act. The ombudsman said the murder was “preventable” and that subsequent investigation into the murder was flawed on a number of different occasions”. It also emerged that police documents relating to the case have disappeared and that a retired RUC officer based in Ballymena at the time of the murder has refused to cooperate with the ombudsman’s investigation. Joe Campbell jnr, who first lodged the complaint with the ombudsman’s office in 2002, said the family’s campaign for justice for their father would go on. “Today we have got a report. What we don’t have, we don’t have the truth and we certainly don’t have any justice,” he said.

‘There was a threat on my father’s life. If you do nothing about it either before or after is it not collusion? – Tommy Campbell.

Three years after the killing retired RUC Special Branch man Charles McCormick was acquitted of Sgt Campbell’s murder. He was convicted of charges including possession of explosives and firearms and armed robbery. These were all quashed on appeal. A second man Anthony O’Doherty, originally from Portglenone in Co Antrim, was convicted of withholding information about the murder but later received a royal prerogative of mercy. A republican, O’Doherty was recruited by McCormick to become a Special Branch informer. In 2009 McCormick was rearrested and questioned about the killing and a file was later sent to the Public Prosecution Service (PPS). However, in 2013 the PPS directed that no action be taken. RUC/PSNI deputy chief constable Alistair Finlay said the report “makes difficult reading”. “It is clear there were significant shortcomings in the RUC handling of information prior to the murder and both subsequent police investigations into Sgt Campbell’s murder,” he said.

With many thanks to: Connla Young, The Irish News,for the original story.

Who is Sir Kenneth Newman?

BORN in Sussex, Sir Kenneth Newman was a well-known and respected police officer in England before he turned his attention to the North of Ireland. 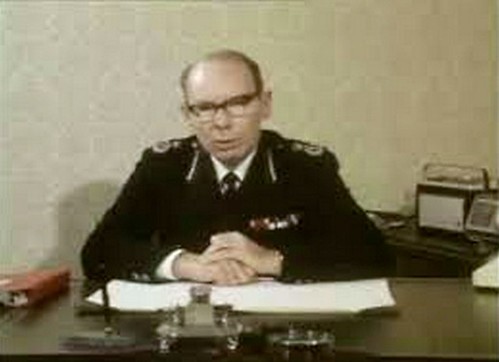 He moved through the ranks becoming a sergeant in the 1950s, before being appointed a detective inspector with the Vice Squad in the early 1960s and later becoming a superintendent and chief-superintendent. In 1973, during the early years of the Troubles, his policing career saw him move to the North of Ireland where he took up the positition of deputy chief constable of the RUC. Within three years he became chief constable of the force. During this time he introduced the policy of Ulsterisation, a strategy aimed at giving the police a greater security role. The strategy saw the RUC replace the British army as the dominant security force in the North of Ireland. Sir Kenneth left the RUC in 1980 during the Hunger Strike period and returned to England. He then served for three years as inspector of constabulary and commander of Police Staff College at Bra shill in Hampshire. During his time at Bramshill he honed his public order skills. In 1982, he became commissioner of the Metropolitan Police and subsequently initiated a major reform. His reform included disbanding the controversial Special Patrol Group – a specialist serious public disorder team – replacing it with the Territorial Support Group. He also established an area-based policing plan, which moved resources into eight geographical areas. Having been knighted in 1978, he retired in 1987.

With many thanks to: Marie Louise McCrory, The Irish News.

A SOUTH Armagh woman whose three sons were shot dead by loyalists during the Troubles has been described as an “inspiration” after she passed away eearlier this week. Sadie Reavey died peacefully in Daisy Hill hospital overnight on Monday surrounded by members of her family.

Three of Mrs Reavey’s sons, John (24),  Brian (22) and Anthony (17), died after being shot by loyalists during an ambush on their White cross home in 1976. The murders were committed by the notorious loyalist the Glenanne Gang, which included members of the UVF, UDR and RUC. No-one has ever been charged in connection with the murders. Mrs Reavey suffered more heartache when her husband Jimmy died prematurely in 1981. There was yet more tragedy for the south Armagh woman in 1994 when her daughter Una McKenna died after losing a battle with cancer aged just 31. Mrs Reavey’s son Eugene last night said his mother always carried her grief with dignity. “She was a very strong person and a lot of people got a lot of inspiration from her over the years,” he said. “The one thing she insisted on was that nobody would try to take revenge for the loss of her sons.” Mr Reavey described his mother as a “descent woman” who was “well thought of” by neighbours and friends.

“Her life was a life well lived. She had a very strong faith and she would have prayed all day and all night,” he said. “That’s what got her through all those bad times.”She went to help other people to deal with her own ccommunity.” Former deputy first minister Seamus Mall on knew Mrs Reavey for many years. “She was a remarkably fine woman who withstood the agony of the murder of her three sons,” he said. “She always showed dignity and herself and her husband Jimmy were an example to the entire community in the way in which they dealt with the murder of their three sons.” Mr MMall on said Mrs Reavey was an example to others. “She was a tolerant woman and a person in the community that people admired respected and loved.” Earlier this year Mrs Reavey was visited in her home by shadow secretary of state Vernon Croaker. Mr Croaker also meet 90-year-old Mary O’Hare, whose daughter MA Ella was shot dead by British soldiers near Whitecross as she made her way to church in 1976. After the meeting Mr Croaker said both woman had handled their “grief with great dignity and compassion”. Requiem Mass for Mrs Reavey will be celebrated at St Brigids‘s Church, Whitecross, at 11am tommorow.

With many thanks to : Connla Young, The Irish News.