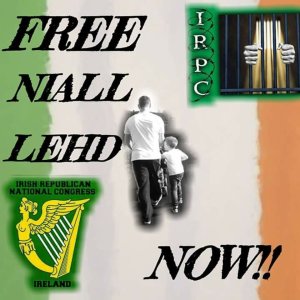 With many thanks to: Irish Republican National Congress – IRPC 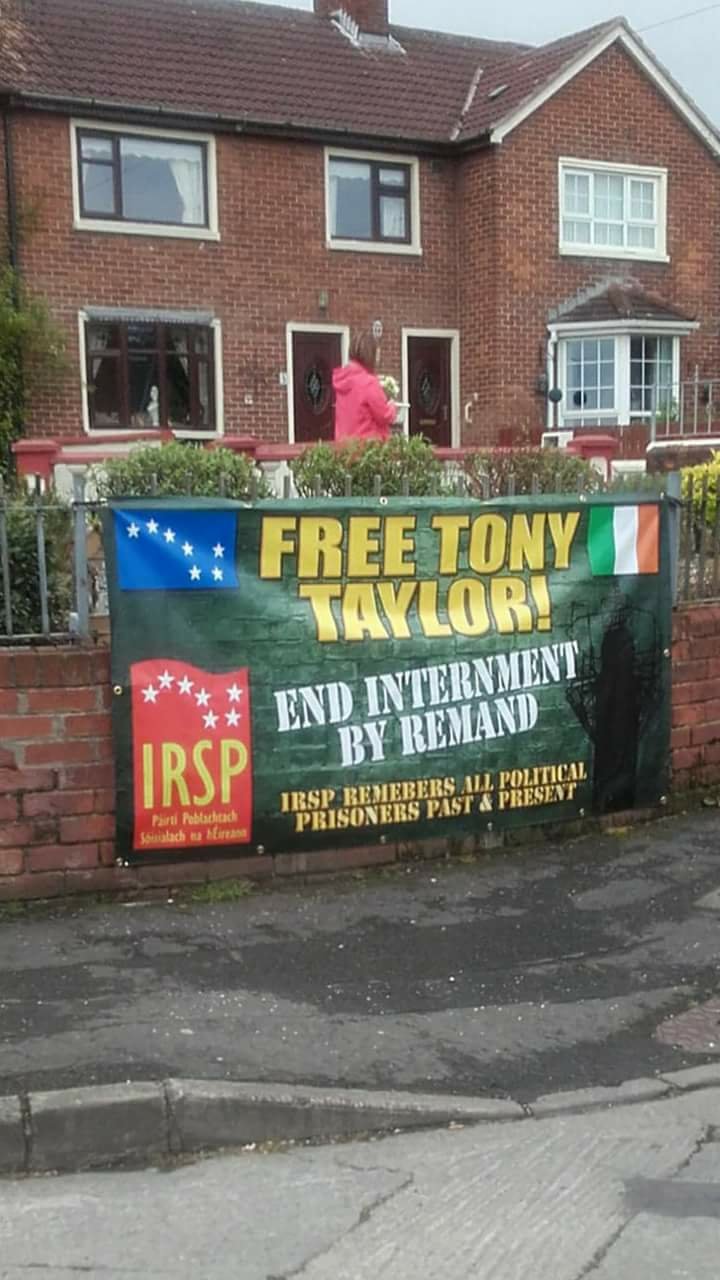 Tony Taylor, a Derry Republican has now been interned for 7 months.

Tony is a normal family man with a wife, children and responsibilities just like everyone else, he has been interned at the behest of the British Secretary of State in Ireland and has no charge against him, he has no case to answer and he has no trial to face. So why exactly is Tony Taylor in Jail? Why was he taken from his home and placed indefinitely in a prison cell? He certainly doesn’t know why nor does his family or lawyers; his predicament can be summed up with only one word – Internment!

This is a word that in 2016 people are hesitant to use, it has an emotive history in Ireland, where hundreds of people in the 70’s had been wholesale subjected to internment. There are even those who somewhat support Tony who are at pains to avoid using this word when talking about Tony’s case, yet anyone with the faintest knowledge of British abuse again Irish Republicans will know that internment is exactly what Tony is a victim of.

It is no secret that Tony Taylor is an ex Republican political prisoner and indeed is still a proud and active Republican. Tony had served 3 years previously in Jail and was released in 2014. Tony was a member of Republican Network for Unity, a perfectly legal Political organisation and he contributed significantly to the local politics in Derry raising issues such as benefit cuts, prison conditions and policing issues.

It is precisely this, Tony’s politics which has led to his internment. Ireland in 2016 is a cold house for Republicanism, anyone who doesn’t rubber stamp the good Friday agreement is a threat to the state, state sanctioned harassment is a daily occurrence for Irish Republicans and in Tony’s case it would seem to me that the extreme of internment has been used against him to try and make him toe the political line.

Of course we have seen this before, in the last few years a number of high profile interments have taken place such as that of Martin Corey and Marian Price, Tony is just the latest victim and undoubtedly he won’t be the last. The revocation of Tony’s licence is justified ostensibly with the line that he is a “risk to the Public”. Any justification they are using to intern Tony is of course subject to secrecy with neither Tony nor his legal team able to see any evidence against him, which of course means he cannot be defended against any allegations.

The current climate worldwide allows governments to act in this secret and abusive way, the general public are happy to believe that these “measures” are taken for their protection that “they” must have a good and valid reason for doing it and that is as far as their thinking goes. This apathy of the general public is essential for governments carrying out this sort of abuse and so it’s up to us all to highlight to the general public why they should be concerned, such is the apathy that these secret agencies do not even need to go through the bother of creating trumped up charges.

Tony Taylor is a victim of the secret Police and agencies working in Ireland, instead of transparently enforcing the rule of law and being subject to public scrutiny as ordinary police agencies do, their modus operandi is to operate beyond and above the law in order to suppress political dissent, anyone who comes under the scrutiny of the secret police can expect to be arbitrarily arrested and detained without due process.

The internment of Tony Taylor strikes at the very heart of democracy and the right to a fair trial. The use of secret evidence and secret police is not something that anyone would expect in the western world in 2016, yet is going on in Ireland; this should be enough for any citizen to publicly question what is going on.

It is now time that the media investigated this case that those concerned with human rights issues demand an explanation as to why Tony Taylor has been taken from his home and incarcerated due to secret evidence that we cannot see. I question the secret evidence, is there evidence at all? Or is this a well-rehearsed ploy to stifle political dissent?

“All that is necessary for the triumph of evil is that good men do nothing.”

With many thanks to the: Irish Republican News for the origional story.

As most people will know on the 10th March 2016 Tony Taylor was taken from his family and interned at the behest of MI5/British government and it is now approaching the 2 year point of Tony’s Internment .
The free Tony Taylor committee are calling on all our friends and supporters to mark this day (10th march) with some form of action to show your solidarity with Tony and his family and show the British government /MI5 that we will never accept the internment of Tony Taylor or any Irish citizen
End Internment
Free Tony Taylor

Anyone organising any events please feel free to let us know and we will gladly advertise it on our page for you.

With many thanks to: Free Tony Taylor’s Facebook Page.

In many places, bonfires were lit and in Belfast a national internment anniversary demonstration was held on the Sunday nearest August 9th until fairly recent years. This has been superseded by a number of highly-successful community festivals, including Féile an Phobail in west Belfast and Fleadh Ard Eoin in north Belfast, which are held at the time of the internment anniversary.

During the conflict, internment anniversaries were flashpoints of resistance. In 1977, the British Labour Government organised a ‘Jubilee’ visit by the Queen of England on August 10th, the day after the sixth anniversary of internment. The North was swamped with extra troops and hundreds of nationalists were arrested in raids in advance of the visit. 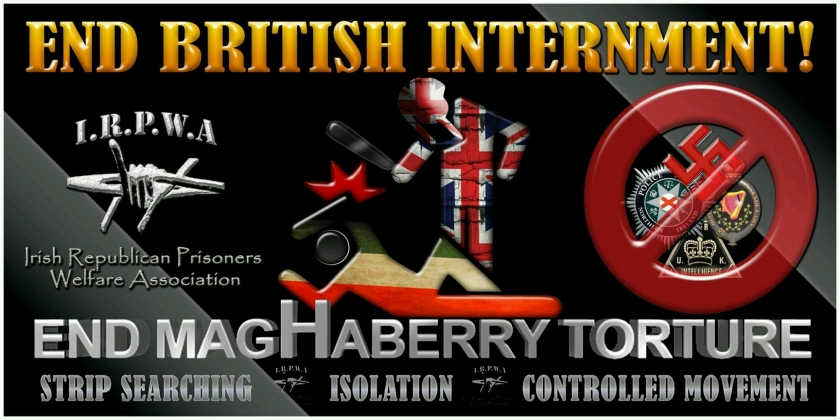 Nevertheless, the IRA succeeded in planting a bomb in the New University of Ulster in Coleraine which exploded shortly after the queen left, while the internment anniversary was marked by a demonstration by thousands of people on the Falls Road behind a banner proclaiming ‘Elizabrit  – Queen of Death’. 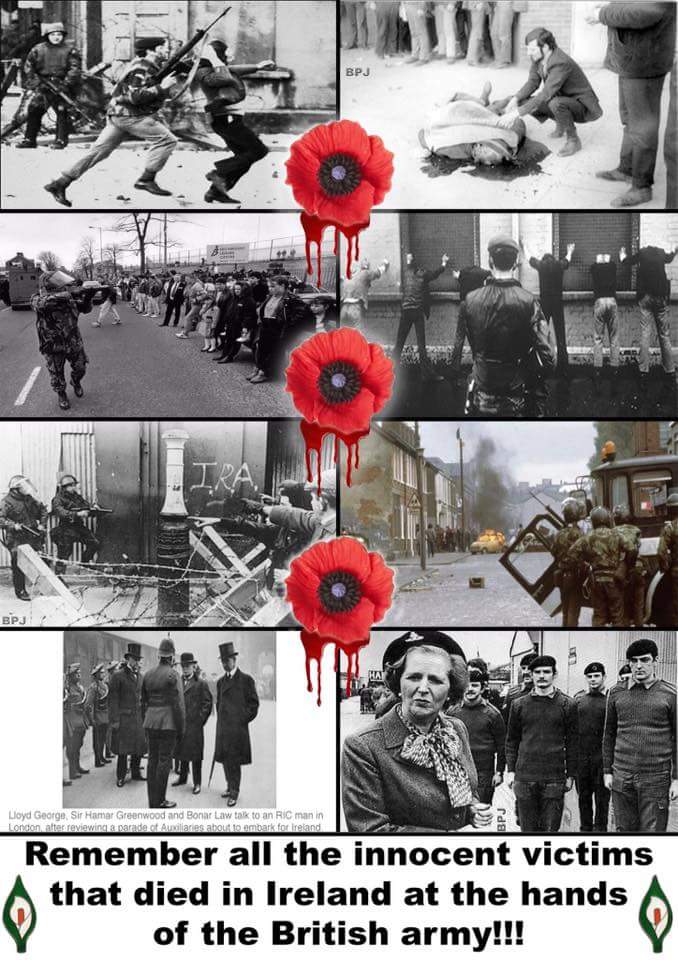 In 1984, the British Government banned Martin Galvin, of the US-based Irish Northern Aid, from entering the Six Counties. When he appeared on the platform at the annual Sinn Féin internment anniversary demonstration in Andersonstown, the crowd was attacked by the scummy RUC firing plastic bullets and a young nationalist, John Downes, was killed by the RUC.

British Internment without trial still goes on today in the North of Ireland in 2017.

With many thanks to: Cara O’Shay.