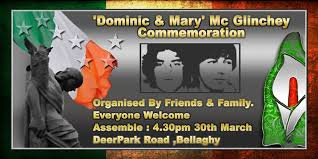 Jason Ceulemans (41), Damien Harkin (48) and Neil Hegarty (48) pleaded not guilty to possessing “an explosively formed projectile-type improvised device” with intent to endanger life on December 6 last year. Ceulemans, of Lecky Road, Harkin, of Westland Avenue, and Hegarty, of Sackville Court, also denied having the device under suspicious circumstances and possessing two walkie-talkies and a torch for terrorist purpose. The arraignment on a count of conspiring together to cause an explosion was adjourned for legal applicatins to be heard. Previous court hearings have been told that an explosively formed projectile is a special type of shaped charge designed to penetrate armour effectively at distances and that such devices are uusually fired by rocket. The device was found in a car stopped by police in Derry’s Creggan area. Judge David McFarland remanded all three defendants back into custody until their trial, due to take place in November.

With many thanks to : The Irish News.

A MAN allegedly caught with a loaded handgun shouted out “tiocfaidh at LA” as police put him in their car, a judge has heard. 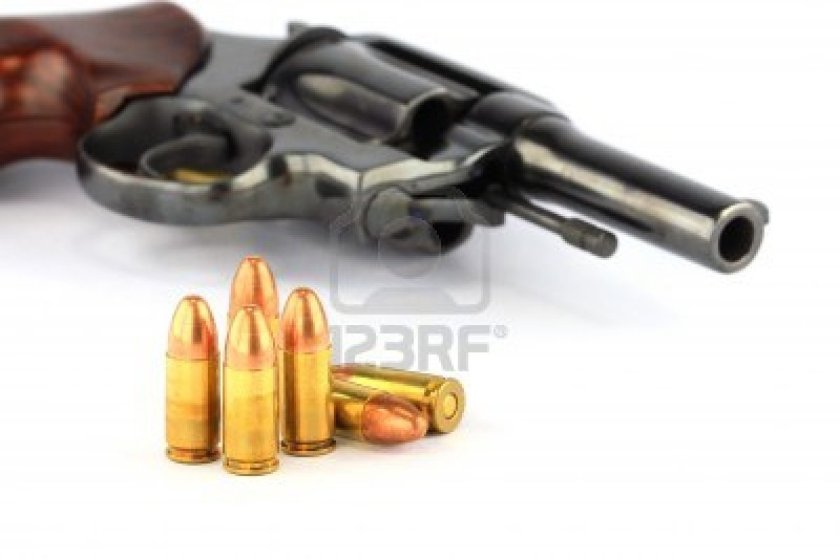 Belfast Crown Court also heard that when officers stopped the Ford Fiesta car being driven by 29-year-old Mark McGuigan close to a forest outside Omagh, he had to be pulled from the car and struggled throughout. Ciaran Murphy QC, prosecuting, told Judge Corinne Philpott QC, sitting without a jury, that having been restrained and put into a protective forensic suit, Mr McGuigan yelled out the republican mantra ‘our day will come’ as officers put him into a waiting police car. Inside the Ford Fiesta, officer uncovered two socks with one containing a loaded revolver and the other 33 assorted bullets. Mr McGuigan, from Sperrin View in OOmagh, denies possecessing the gun and ammunition with intent to endanger life under suspicious circumstances. Mr Murphy told the court the gun had been deactivated in 2003 but had been reactivated to fire live bullets. He added that the firing pin in the revolver was not long enough, although a small adjustment would have been enough to allow the gun to fire. Three other men who were also in the car, including two men who were hiding under a sleeping bag in the folded down rear seats, have already pleaded guilty and are awaiting sentence. The trial continues.

With many thanks to : The Irish News.

‘During police interviews the taxi driver claimed nothing had happened.

A TAXI driver who sexually molested a teenage schoolgirl after telling her she had “nice legs” has been jailed for a year. As well as ordering William Torbitt (39) to spend two years on supervised licence conditions, Belfast Crown Court Judge Gordon Kerr QC also ordered him to sign the the police sex register for the rest of his life.

The judge had earlier heard how Torbitt collected the girl from her school on February 13 and was taking her to a medical appointment when the incident happened. Rosemary Walsh, prosecuting, recounted how Torbitt told the girl she “must do PE because you have nice legs” and then he asked her to move her blazer so that he could see them. He then reached over and touched the girl. Torbitt, from Mayfield Heights in Newtownabbey, had also twice asked the girl what age she was told twice that she was 14. Following the attack Torbitt took the girl to her appointment where she reported what happened. Torbitt was then arrested later that day. During police iinterviews the taxi driver claimed nothing had happened, maintain that stance even when DNA evidence of the girl’s DNA profile was uncovered under his finger nails and that was put to him. However, he later pleaded guilty to a single charge of sexual activity with a child. A defence lawyer said the married father-of-two had suffered a a “moment of madness” for which he was already paying a heavy price in terms of the loss of his reputation, job, liberty and marriage.

Sicko who sexually assaulted a 12-year-old is on Belfast Streets.

HERE’S a warning to all kids : If you see this man aaround Custom House Square – RUN. Because he’s a dangerous paedophile who abducted and sexually assaulted a young girl by touching her genitals and kissing her but who is living just a stone through from Custom House Square. 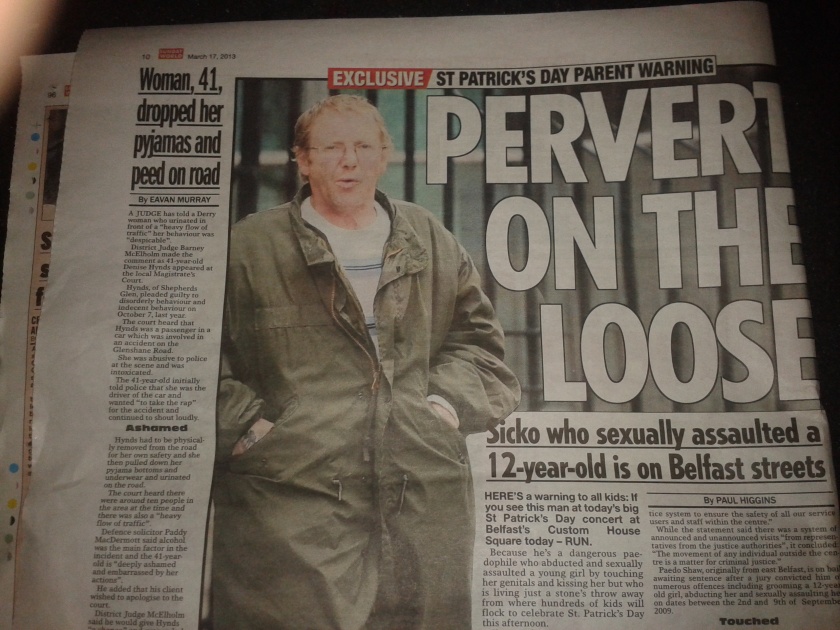 Sleazy Colin ‘ Beep ‘ Shaw was due to be sentenced at Belfast Crown Court last Thursday but was adjourned until Wednesday 20th March. He is facing 14 years behind bars after a jury convicted him of grooming and sexually assaulting a 12-year-old girl whom he also abducted. Shaw’s address at a hostel in Victoria Street right across the road from Custom Hobefore quare where hundreds of kids and their families celebrated St Patrick’s Day concert and celebrations last week where the City Council had set up a specific kid’s carnival and play zone. Just two pavements and three lanes of traffic seperated 48-year-old Shaw’s ffront door from where the concert was being held, many of the windows at the hostel even overlook Custom House Square. Nither hostel mangement or the PSNI/RUC would comment on how the risk he and other paedophile predators pose would be managed.

A three line statement from the PSNI/RUC and the Public Protections Arrangement unit said that sometimes, they bbelieved ” hostel accommodation is more effective in terms of protecting the public “. ” Offenders residing in hostel accommodation are subject to a range of restrictions and may be subject to sexual offences prevention orders, curfews and electronic tagging, the statement concluded. A spokesman for the Salvation Army-run hostel would not comment when asked if there were any other paedophiles living alongside Shaw. Their statement said that as part of their work as a church and charity, ” we risk assess service users and work closely with professionals within the justice system to ensure the safety of all our service users and staff within the centre.” While the statement  said there was a system of announced and unannounced visits ” from representatives from the justice authorities “, it concluded : ” The movement of any individual outside the centre is a matter for criminal justice.” Paedo Shaw, originally from East Belfast, is on bail awaiting sentence after a jury convicted him of numerous offences including grooming a 12-year-old girl, abducting her and sexually assaulting her on dates between the 2nd and 9th September 2009.

As part of those bail conditions Shaw, nicknamed ‘ Beep “, is barred from going within 20 metres of any ” child centered facility ” and he’s the subject of an afternoon curfew so that he is indoors when kids get out of school, previous  courts have heard how he breached both bail orders and hostel rules. During hist trial last November, the Belfast Crown Court jury heard how Shaw befriended the 12-year-old, giving her cigarettes, often booze and takig her to the Ozone Leisure Complex. His offending came to light on September 9, 2011, when the girl failed to come home and when she eventually did, she told them how Shaw had twice kissed her on the cheek, touched her private parts and hugged her before they parted company. When Shaw’s property was searched, cops uncovered receiceipts for a mobile phone and sim card, as well as a poem written about a girl with the same name as the 12-year-old girl. Chillingly, officers also found a map of east Belfast pinned up on the wall marking out every nursery, primary and secondary school in the densely populated area with circles. when Shaw’s sentencing hearing was adjourned last Thursday, Deputy Recorder of Belfast Judge Corinne Philpott QC revealed that a probation assessment had concluded Shaw was ‘ dangerous ‘ in that he was likely to re-offend and that he posed a significant risk of causing serious harm to any future victim. That means Shaw could face either an extended custodial sentence, or even an indefinate jail term, meaning that Shaw would not be released until it was thought he could be safely managed in the community. On Wednday 20th March Shaw faced a maximum sentence of 14 years and potentially a whole raft of court orders to dictate all aspects of his life.

With many thanks to : Paul Higgins, Sunday World