Video of the speech has gone viral after the Prime Minister claimed Northern Ireland was getting a “great deal” by staying in the European Union’s single market and keeping “free movement” (unlike the rest of the UK). He is seen to state

Lewis Goodall
@lewis_goodall
NEW: I’ve obtained the full video of PM yesterday. In it he is asked point blank if any NI>GB trade will be subject to customs declarations. PM: “You will absolutely not. If anyone asks you to do that tell them to ring up the PM and I’ll direct them to put that for in the bin.”
1:03
1.2M views 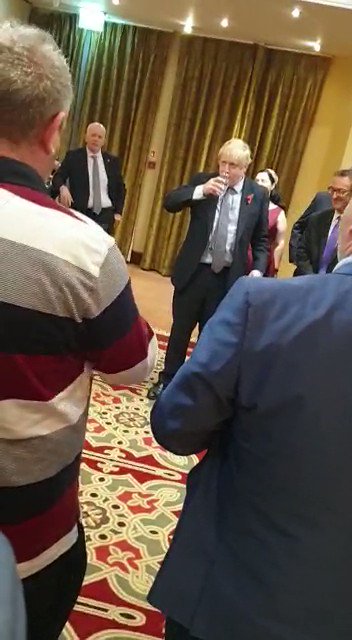 1:59 PM · Nov 8, 2019·Twitter for iPhone
These are legally binding international commitments. Not sure what the EU will think about the PM apparently reneging on details of his deal so quickly. When his own ministers appear to be trying to implement them 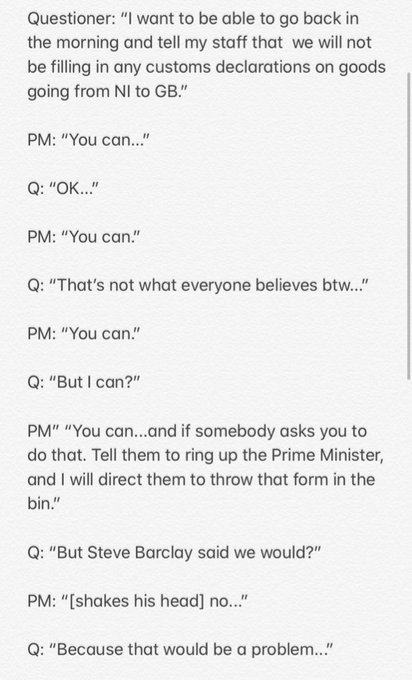 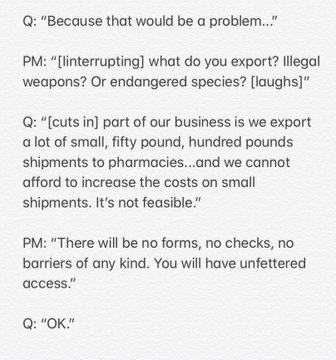 As I reported last month govt docs, including the new NI protocol are clear. There WILL be new processes for NI so long as it stays in EU reg zone. You either have to conclude the PM doesn’t understand his own policy or is misrepresenting it to this room.
Conversation

Putting aside the complete lies he is telling, is this the best the country can do for a leader, a drunk, mad uncle at a wedding reception? There are conversations with bots on Twitter more statesmanlike than the constant lies & word spaghetti #BorisJohnson aka(

NEW: I’ve obtained the full video of PM yesterday. In it he is asked point blank if any NI>GB trade will be subject to customs declarations. PM: “You will absolutely not. If anyone asks you to do that tell them to ring up the PM and I’ll direct them to put that for in the bin.”

Full transcript. By my count PM gives no fewer than six assurances that there will be no forms to fill in on NI to GB trade. He says his Brexit Secretary
@SteveBarclay

is wrong. He says “there will be no forms, no checks, no barriers or any kind. You will have unfettered access.”

@SteveBarclay
Boris Johnson sounded drunk but it’s hard to tell these days….I’d like to say this is unbelievable but I’m way past that point.
9:17 AM · Nov 9, 2019·Twitter for iPad
Quote Tweet
There was confusion on Monday as to whether the checks/forms that will need to be done for goods going from NI to GB would need to be done by firms exporting the other way, from GB to NI. Barclay refused to say. Dexeu confirms to me that they will. So checks in both directions.
Show this thread

Is he drunk?
Will people really #VoteTory to keep this guy in #Number10?#r4today 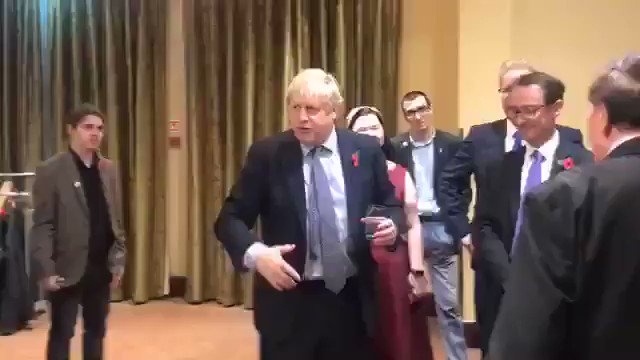 Boris Johnson a new inductee into the Boris Yeltsin school of making up policy when drunk https://twitter.com/lewis_goodall/status/1192803905824075776 …

NEW: I’ve obtained the full video of PM yesterday. In it he is asked point blank if any NI>GB trade will be subject to customs declarations. PM: “You will absolutely not. If anyone asks you to do that tell them to ring up the PM and I’ll direct them to put that for in the bin.”

See Michael East’s other Tweets
When you come out of the EU customs union which is what we’ve done, you have to have some way of checking that goods that might attract a tariff going from the United Kingdom into Ireland pay that tariff, if there is to be a tariff.

Johnson continues, “The only place you can do it, if you don’t do it at the border, is at the border in Northern Ireland” before claiming:

the looks on their faces 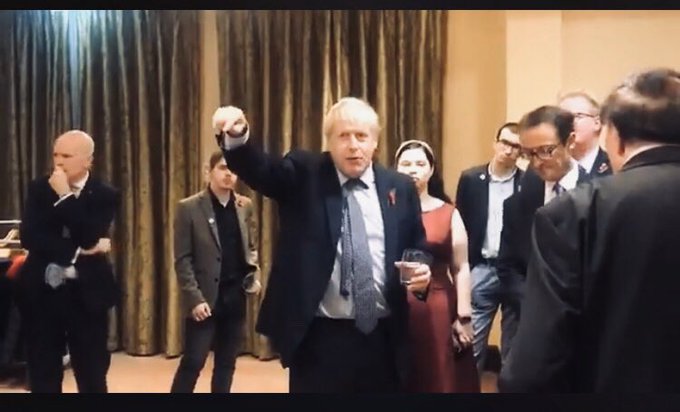 People had thoughts on this, as you might expect, not least because Brexit Secretary Steve Barclay has previously stated that Northern Ireland businesses will be forced to fill out export declaration forms when sending goods to Britain. Which would completely contradict Boris Johnson, who to believe? Who knows.

Social media speculated that the PM was not only confused by his own Brexit deal, that he was also drunk.
Others thought his performance could best be summed up by those around him:

With many thanks to: Indy100 and Darren Richman for the original story