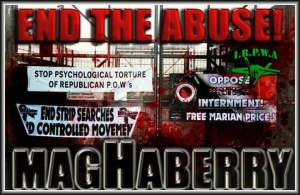 Republican Prisoners wish to highlight the continued use of draconian health care arrangements as a tool of oppression by the Jail Administration.

Over the past number of months several Republican Prisoners have been subjected to degrading treatment when attending outside hospital, in the form of forced strip-searches and the denial of doctor-patient confidentiality.

Despite it being internationally recognised that all patients medical history is to be held under legal and ethical obligations of non-disclosure we are forced to discuss our medical business and undergo sensitive procedures with screws watching and listening: This doesn’t even happen in Guantanamo Bay.

Our return to the jail follows the same process, we are either handcuffed to escort screws or in the secure transport in their presence. The process concludes with another forced strip-search.

This again, reflects the length to which the loyalist NIPS will go to oppress Republican Prisoners; by violating International Convention with impunity.