A DERRY man charged in connection with the discovery of mortars in March R has been approached in prison by MI5 to turn ssupergrass, a court has been told. A solicitor for Gary McDaid, of Glenowen Park, told a remand hearing on Thursday at Derry Magistrates Court that while in Maghaberry Prison his client had been asked on six occasions to plead guilty and become an assisting offender. 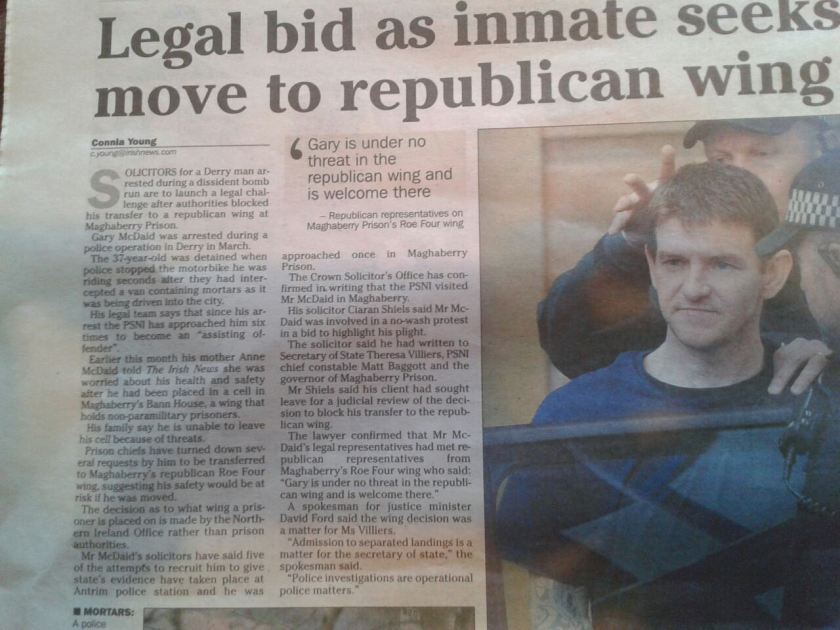 The approaches were made in the absence of McDaid’s solicitors, he said.Representations had been made to the Prison Service, the Chief Consable, the Secretary of State and the High Court in regards to the approaches. Deputy district judge John Meehan said one possible remedy could be the granting of bail to McDaid. He adjourned the case for one week for the prosecution to show cause why McDaid should not get bail. The Northern Ireland Office confirmed in a letter that the PSNI had visited McDaid in Maghaberry. McDaid and co-accused, Seamus McLaughlin (35) of Eastway Gardens, Creggan, Derry, are both charged with conspiring to cause expolsions and pocessing improvised mortars on March 3. The charges relate to the discovery of four mortars in a van on the Letterkenny Road in the city.