This letter appeared in the Irish News yesterday May 6 2013

MR CORRIGAN of Belfast’s Amnesty international office attempts to defend Amnesy’s stance in relation to political prisoners in his own jurisdiction (April 26). 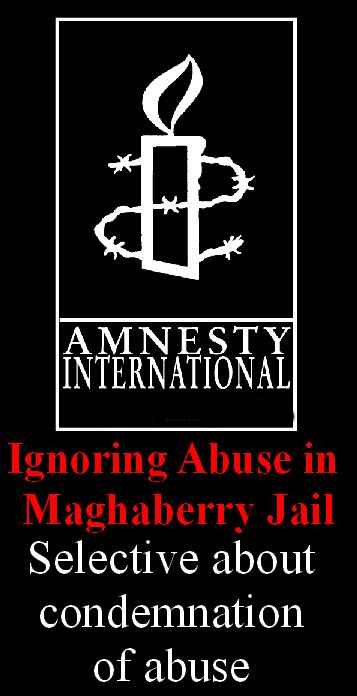 Marian Price‘s case has been raised and made known by individual human rights activists and by the efforts of her family. I would very much doubt that the public are aware of Amnesty’s stance on the imprisonment of Marian Price, or the ever-increasing number of political prisoners being held on the direct orders of the Northern Ireland Secretary of State, in spite of being granted bail or their freedom by the courts in the North of Ireland. Amnesty say they “have responded to queries” regarding Marian Price’s case. Strangely, when the Russian women involved in the Pussy Riot case were arrested, Amnesty were able to immediately launch a public campaign calling for the women’s release, throwing the full weight of their organisation behind the case. None of the women involved were elderly or sick, and whatever the merits of the case, they have a release date and are not being held indefinitely.

The only conclusion that can be drawn is that Amnesty International practise political vetting. They only publicise and call for the release of prisoners who are friendly to the Anglo-American power-bloc. When Sean MacBride and others founded Amnesty International in Ireland in 1963 they could never have envisaged the use of political vetting when supporting political prisoners. A mark of civilised society is how you treat your enemies, not your friends. Perhaps it is not to late for Amnesty international to redeem itself. Could the organisation call for the release of Marian Price and other Irish detainees, as they did for the women in Russia ?

With many thanks to : Mark Duggan, Dublin.

One thought on “DOES AMNESTY PRACTICE POLITICAL VETTING ?”