I took this article off  irishrepublicanhistory Facebook page and hope that they don’t mind but I would just like ( coming upto Easter )to highlight the ongoing suffering of Marian Price & other Political Prisoners and their sufferings and beatings that are still going on today in the North of Ireland. Sinn Fein & the DUP tell us all about this NEW IRELAND but the working class people on the street only see what was there before there is NO CHANGE in fact things in a lot of cases have become worse and now Sinn Fein is endorsing British Rule in the North of Ireland and standing by and saying nothing for its People while these injustices are carried out.

Please read on and you can make your own mind up !! 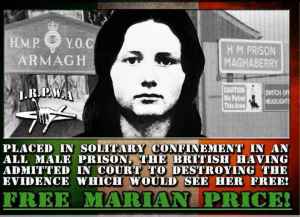 The North’s most high-profile female republican revealed the terrible toll her time in isolation in Maghaberry prison has taken on her physical and mental health.

But in an exclusive interview from behind bars with Sunday World, she wouldn’t condemn dissident republicanism or ‘armed struggle’.

“I remain a proud and unrepentant republican. I make no apology for that,” she said.

Price claimed as long as Britain remained in the North, “Irish people have a right to resist that occupation”.

Once a close associate of Gerry Adams, she became disillusioned with Sinn Féin in the mid-1990s and joined the dissident political group, the 32 County Sovereignty Movement.

Speaking from Maghaberry jail, she admitted only a tiny minority of people share her views which have little electoral support. “I accept what you’re saying but being a republican isn’t about entering a popularity contest – it never has been,” she claimed.

Price, a 57-year-old mother of two, has been held without charge in isolation in the all-male jail since Secretary of State Owen Paterson revoked her licence in May.

Along with her sister, Dolours, she became a household name when she went on a lengthy hunger-strike and was force fed in Brixton prison. Gravely ill with tuberculosis and anorexia, and weighing only five stone, Price was released on licence in 1980.

Weeks later, she was granted a royal pardon. Her lawyer claims this superseded the licensce, meaning she could never be returned to jail on the basis of her previous conviction.

Asked repeatedly in court to produce the pardon, the NIO says it has been “lost” and probably shredded. Price will appear before the life sentence review commission in Maghaberry on Wednesday.

Solicitor Peter Corrigan, will argue that she be freed immediately. “It’s very convenient that the only lost document in this case is the pardon,” he said. Corrigan revealed the UN special rapporteur on torture recently called for solitary confinement to be banned in all but “exceptional circumstances” and for it never to last more than 15 days.

“Marian Price has been in solitary seven months. This shouldn’t happen in a civilised country. Even those who vehemently oppose my client’s politics must realise this amounts to inhuman and degrading treatment,” he said.

There’s tight security on my visit to see Price. I’m photographed, fingerprinted three times, walked through an airport-type scanner, subjected to a body search and then the sniffer dog.

Price sits alone in a large, soulless room in an isolated part of the jail. Neatly dressed in a cream top and grey trousers, wearing a Celtic cross on a gold chain and pearl earrings, she seems more like a middle-class professional woman than a republican prisoner.

Calm, but clearly stressed, Price said: “I get three visits a week in Maghaberry. Those three hours’ conversation is the only contact I have with other human beings. Of course, it’s taking its toll on me.”

Her hands and arms are covered in psoriasis, brought on by stress. She’s shed several stones in weight and is losing her hair. “When I brush it every morning, it falls into the wash-hand basin in clumps,” she said.

The DUP claim she’s enjoying a life of luxury in the Co Antrim prison. “That’s ludicrous,” she said, describing in detail her existence in a small sparse cell and tiny exercise yard.

“My cell is 10 x 7 ft. It has a bed, a toilet, a wash-basin and a TV which I pay for. During the day, I have access to a recreation room – with a TV – and a shower room which was so filthy I’d to clean it myself before using it.”

The perimeter of her exercise yard measures just 85 paces and is surrounded by a 25-ft high wall.

She speaks of the “mind-numbing boredom” of solitary. She’s allowed only two books a week. She reads Swedish crime writer Stieg Larsson’s novels and surprisingly the right-wing British Daily Mail “for the word puzzles”. 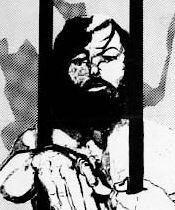 She watches nature and current affairs’ documentaries on TV. Again confounding the Irish republican stereotype, her favourite programmes are the English period dramas ‘Downton Abbey’ and ‘The House of Elliott‘ – “I love the fashion, especially the hats and the coats with the embroidered sleeves!” she declares.

She praised the female prison officers who are nearly all from the unionist community: “Bar a few, they’ve been lovely and many have been very kind. In a different life, we’d be friends. But the reality in Maghaberry is I’m the prisoner and they’re my jailers.”

With her sister Dolours and Gerry Kelly, now a senior Sinn Féin politician, Price was part of an IRA team which in 1973 planted four bombs in Britain, including one at the Old Bailey. Around 200 people were injured, mainly with flying glass. One man died of a heart attack.

The sisters were arrested about to fly home from Heathrow. While on hunger-strike in Brixton jail, Price was force-fed 400 times over six months. That stopped when a doctor mistakenly put the tube into her lung and she lost consciousness and nearly died.

“The moment I was imprisoned in Maghaberry, in my head I was instantly back in jail in England. I was institutionalised again. It was like the last 30 years didn’t exist. I’d got married and had two daughters but it was as if that hadn’t happened and I’d never had a life beyond prison walls.”

Price is currently facing two charges relating to dissident activity – holding a speech for a Real IRA member at an Easter commemoration and allegedly providing a mobile phone for terrorist use.

She was granted bail on both charges. When asked if she regretted involvement with dissident republicanism, she replied: “I’m not whinging about either charge. Let justice take its course.

“If convicted, I’ll serve my sentence without complaint. But I object to being held as a political hostage without charge because of my past, not my present.”

Price stressed that, unlike many Sinn Féin leaders, she’d never lie about her IRA past and was “very proud” of it.

Asked if she’d condemn dissident attacks, she replied: “The 1916 Proclamation upholds the right of Irish people to take up arms as long as Britain occupies Ireland. I stand by the Proclamation which hangs in Enda Kenny’s office.”

She’s even more uncompromising than her male comrades. When a Sinn Féin delegation, including MLAs Jennifer McCann and Raymond McCartney, visited Maghaberry, the men dissident prisoners met them.

Price refused: “The prison staff said, ‘Your friends are here to see you.’ I told them ‘These people are no friends of mine. If they try to visit me, lock me in my cell.'”

Price claimed the NIO wouldn’t have revoked her licence without approval from Sinn Féin and the DUP. “Sinn Féin might be hypocritical but I’m not. I wasn’t having them shedding crocodile tears over my case to appease their grassroots.”