Last night two jeep loads of paramilitaty police armed with automatic rifles attempted to harrass éirígí activists as they were fixing éirígí’s easter banner on the falls rd. All activists were stopped and searched under “terrorism” legislation. As the activists were being harrassed, passers by stopped to question the armed malitia’s reasons for searching the éirígí members and to lend their suppo…rt to them. The PSNI/RUC then stopped and searched members of the public before leaving, failing in their attempts to stop éirígí re-erecting their easter banner. The actions of this armed militia last night prove that the PSNI is, as the RUC and the RIC before it, unchanged, unchanging and unchangable! POSTED ON BEHALF OF : by: Stephen Murney 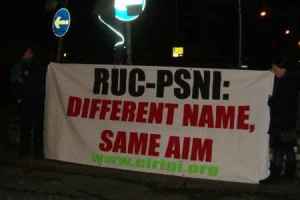