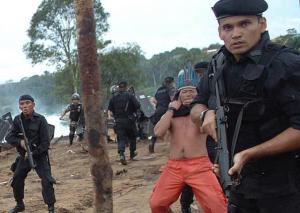 We’ve already delivered half a million signatures to Brazilian president Dilma Rousseff, but we’re just getting started. Help us stop the Belo Monte Dam by signing the petition here!

Please help us defend our river and future generations by signing this petition.

I support the demands of Brazilian civil society and urge you to defend the Amazon and its people and stop the Belo Monte Dam Complex.

I am deeply concerned about your plans to build the Belo Monte Dam Complex on the Xingu River in the Amazon, in violation of the human rights of indigenous people and other threatened populations, and despite warnings by renowned Brazilian scientists, engineers, economists and religious leaders about the project’s huge social and environmental costs and lack of economic viability.

I support the demands of Brazilian civil society that the Brazilian government immediately stop the Belo Monte Dam Complex, and instead:

Brazil has an opportunity to demonstrate global leadership in protecting the Amazon, its people and the global climate. Current and future generations of Brazilians are counting on you to make the right decision.

THE WORDING ABOVE IS THE WRITING ON THE PETITION & THIS IS THE DIRECT LINK : http://amazonwatch.org/take-action/stop-the-belo-monte-monster-dam

This picture is to go around the world.
The evacuation of the Kayapó tribe – an Indian people of the Amazon region in Brazil’s Mato Grosso has started.
The construction of the Belo Monte hydroelectric dam is released, despite numerous protests and more than 600,000 signatures were collected.

Thus, the death sentence was spoken about the people at the great bend of the Xingu River. Belo Monte will be a total of 400,000 hectares of flooded forest, an area that is larger than the Panama Canal. 40,000 people of indigenous and local communities are distributed – the habitat of many animal and plant species will be destroyed. All this in order to produce electricity, the easier, more effective, and can be profitably produced primarily by investors.

I know this does not happen to our country, not on our continent. Some people will say I do, what we care Brazil? As if we did not have their own problems.
But this opinion I am not! The despair inherent in this picture brought me to think.

The history of the Kayapó tribe should go around the world and perhaps cause a rethink. Away from the ruthless capitalist progress towards responsible society.

Parts of it, if you want to know more people from the fate of Kayapó tribe should.

I like = I do not like. (your friends will see that on their home page, name inappropriately, but a positive effect)

PS:. Also you can sign the petition online, thus supporting the opponents of the Belo Monte dam directly.
http://amazonwatch.org/take-action/stop-the-belo-monte-monster-dam

n 2004, thirteen Indigenous Grandmothers from all four corners, moved by their concern for our planet, came together at a historic gathering, where they decided to form an alliance: The International Council of Thirteen Indigenous Grandmothers. This is their story. Four years in-the-making and shot on location in the Amazon rainforest, the mountains of Mexico, North America, and at a private meeting with the Dalai Lama in India, For the Next 7 Generations follows what happens when these wise women unite. Facing a world in crisis, they share with us their visions of healing and a call for change now, before it’s too late. This film documents their unparalleled journey and timely perspectives on a timeless wisdom.

The Elders Speak
Lakota Traditional Elders met today in the Porcupine District to discuss the on-going issues with the OST Tribal Governments failure to address and meet the needs of the District’s Elderly .

During the meeting the Elders ask one of my relatives to call me and have me call where they were meeting so that I might hear their words and share them with the world.They spoke in the Traditional way of the Lakota, each taking a turn at speaking.Hearing their words, their daily struggles to just survive was heart wrenching and would make any with a soul angry.

It was humbling to hear the words of Unci (Grandmother) Ester Whiteface who was born on Feb 11th 1922 and speaks about the small amount of food provided through the Elder Meals Program,of the failure to get any real help, adequate medical care,transportation and heating help or any of the basic needs.That she and many of the Elders have less than $400 a month to pay rent & utilities with,buy food, get to & pay for medical appointments etc.

Her daughter Lorraine who is 77 years old, spoke about being assaulted,hit and kicked by younger women last week when she went to where the Trucks were dropping supplies, as the younger women tried to take the small box the truck driver had given her away from her. She spoke about how she felt bad hitting them back as holding anger and acting in anger was not the Lakota way, but she could not help it. That she is poor and they needed those supplies.She Spoke of needing transportation at times and when the Tribe would help with money it was $15 to $20 and once a Elder had received it were ineligible for help again for six months.

Enoch Brings Plenty spoke of how the Elders had asked that he be put in charge of the Elder Meals Program,How after the Occupation of The Elders Center by the Elders.The same relative of a Council Member that had been in charge before the Occupation had been hired back and was again in charge.How once again the Elders that were getting any food from the program were not getting enough. He spoke about how in spite of a $100K allotment for a New Center & The Elder Program in the District, That The OST Council are again talking about renovating the current building.A building that has now been condemned 4 times by different State & Federal Agencies.He spoke of the in-ability for many of them to get housing, so they lived in old mobile homes,often with holes in the roofs, cracked & broken windows and general disrepair and no help with maintenance.

He spoke of them no longer even knowing where to turn for help and that they just kept hanging on, struggling to survive and praying that some-one, some-how would make a difference and change things for the Elders there.

Unci Cecelia Martin spoke of being in a wheel chair, having to pay the Tribal Housing Authority rent, but that she had a hole in her living room floor that they would not repair.

She told of how there is a $3.750 allotment every 90 days for the Elder Programs in the District as well, and how to date there has never been a clear accounting of where those funds are going really made.

She shared about being with-out food, how often all the Elders deal with that. Of stopped up sewers and no one fixing them and not having money to hire and pay some-one to do so.That her grandson and a few others try to help her and the other Elders but it is difficult to address all the needs when they too have limited incomes.

A 22 year old Warrior named Leo, Who stayed with the Elders through out the entire Occupation of The Elder Center shared his thoughts and feelings about the experience, and how his heart had been touched by the strength and courage of these Elders.He stressed how important it is that the World understand what is truly happening on Pine Ridge to the Elders, of the abuse they are being subjected to by their own BIA Tribal Government.

After hearing my Elders speak going between Lakota and English, Leo’s words indeed need to be a reminder to the Lakota Oyate.” Our elders built today for us yesterday, as Lakota People we need to recognize that and show respect and honor and help them”

Cante Tenza Okolakiciye also known as the Strong Heart Warrior Society of the Lakota Nation is an ancient Lakota warrior society as well as a broad-based civil rights movement that works to protect, enforce and restore treaty rights, civil rights, and sovereignty of Native people and their communiti…
https://www.facebook.com/photo.php?fbid=10150734279313799&set=a.128287458798.127887.45899978798&type=1&theater

4 thoughts on “The evacuation of the Kayapó tribe – an Indian people of the Amazon region in Brazil’s Mato Grosso has started.”