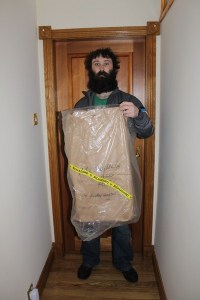 The 35-year-old convicted paramilitary – who has just been released from Maghaberry Prison – took part in the protest, which involves mixing urine and excrement and spreading it around the jail.


The tactic was used by IRA prisoners in the late 1970s and early 1980s. They refused to wash, and grew long beards.


Similar tactics have been used in Maghaberry since May 2011 by an estimated 30 prisoners.


Rather than smear excrement on their own cells, most of them are throwing it out onto prison landings.


Prison officers on the wings are forced to wear forensic suits, latex gloves and face-masks.


Industrial cleaners are used to clean the wings on a daily basis.


The prisoners are protesting over the number of forced strip-searches taking place.


McLaughlin, from County Tyrone, said he underwent 24 strip-searches during his time behind bars.


He was jailed after being found guilty of possessing two rifles, a sawn-off shotgun and more than 100 bullets.


In a BBC interview, he was asked a series of questions:


What’s your problem with strip searching?


“Strip searching is a form of humiliation. There is no need for it. There’s technology to do it, the BOSS chair – body orifice security scanner.”


But the authorities regard you and other prisoners as dangerous men, they need to use the human eye and human touch in a search.


“The BOSS chair is a scanning system that picks up any of the things they’re talking about.


Exactly what form is the prison protest taking?


“At the moment the boys are embarking on a protest where they’re mixing their urine with their faeces and they’re putting it out onto the landings, and that has been ongoing since 6 May last year.


“They’re living in their own waste at this present time.”


When will it stop?


“No Boss chair – protest goes on. The protest will go on while they’re forcibly strip-searching republican prisoners.”


What’s it like inside the part of the jail you were in?


“The smell would be one of the first things that would hit you.


“I was talking to one of the fellas recently who came in while I was in, and he said as soon as he came onto the wing, the fumes and the smell of the human waste hit him, it brought tears to his eyes. It’s really bad.


“There’s industrial cleaners going all day trying to clean it. The cells are rotten. There’s human waste and bits and pieces of food lying in corners of cells.


“There’s waste all round the doors. It’s really bad.”


You and the other men in jail are seen as very dangerous people, what is the problem with strip-searching?


“The problem is you’re being humiliated and degraded.


“They’re making you wiggle your tongue, stand on one foot, wiggle your toes, all sorts of degradation. When they forcibly strip you, they send in the riot squad.”


You were convicted of possessing guns and ammunition, why should anyone have any sympathy?


“People who are sent to jail have lost their liberty. That’s bad enough.


Are you sorry for what you did?