Pressure is growing for the immediate release from jail of former republican spokeswoman Marian Price after it was admitted that a royal pardon central to her case has been shredded by the British government.

Ms Price, 57 years old and in poor health, has been held in solitary confinement at the notorious Maghaberry prison since her arrest in May in connection with a republican rally at Derry’s city cemetery on Easter Sunday.
She was jailed for IRA activities in 1973 but was given a royal pardon in 1980 because she appeared to be close to death from anorexia.

But after acting as a spokesperson for the 32 County Sovereignty Committee and heading up a prisoners’ welfare campaign, she was arrested and returned to prisin by British Direct Ruler Owen Paterson.
Her legal team have insisted the pardon should have precluded her return to jail on the basis of previous offences.
Last month the British government confirmed that the pardon document had been “lost”. On Wednesday, a parole commission hearing in Maghaberry heard the pardon had actually been shredded.
The veteran activist will now spend Christmas behind bars after judgment on her parole was reserved until the New Year.
Following the hearing, her solicitor Peter Corrigan said: “The royal pardon is central to the case against our client’s detention.
“During the parole commissioners’ hearing it was confirmed that the pardon has been shredded, in light of this information Owen Paterson should release Marian Price immediately.”
“It’s very convenient that the only lost document in this case is the pardon,” he added.
Mr Corrigan revealed the UN special rapporteur on torture recently called for solitary confinement to be banned in all but “exceptional circumstances” and for it never to last more than 15 days.
“Marian Price has been in solitary seven months. This shouldn’t happen in a civilised country. Even those who vehemently oppose my client’s politics must realise this amounts to inhuman and degrading treatment,” he said.
The SDLP has challenged the Justice Minister at Stormont about the continued internment of Marian Price.
Mr Ramsey said, “I raised with the Justice Minister the current incarceration of Marian Price which I believe to be morally wrong given her state of health and the fact that she is being detained as a result of the Secretary of State’s action in revoking her license, a totally unaccountable act.

“This case is of paramount importance to bring a new level of confidence in how we deal with justice related matters.”
Boards were erected this week highlighting her case and a push to release her for Christmas.
The 32 County Sovereignty Committee in Derry blasted Sinn Fein for their inaction on the matter.
According to a statement, Price’s former comrades “sit within the bastion of Unionism [Stormont] playing at politics and getting handsomely paid for their pretence — until Westminster, as it tends to do, flexes it muscles to show where the real power lies.
They pointed to a saying attributed to Irish martyr James Connolly: “Ruling by fooling is a great British art — with great Irish fools to practice on.”
They said; Internment has been reintroduced, Irish innocents are suffering once again British injustices, and those who shouted loudest about previous miscarriages of justice are now implementing new miscarriages of justice for their paymasters.” 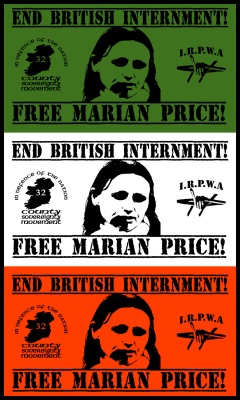