Skip to content
A Republican on dirty protest in Maghaberry jail claims the North’s top security prison is fast deteriorating into a cesspit of disease. 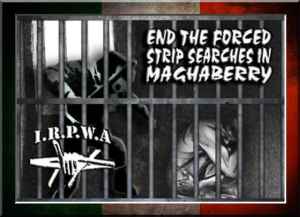 Damien McLaughlin, the first prisoner on the protest to be freed, described in graphic detail the horrific conditions in which republican inmates live and prison staff work. The 34 …republican inmates are engaged in a bitter dispute with the authorities over forced strip-searching. McLaughlin said: “Prisoners are smearing their excrement on cell walls or else mixing it with urine and pouring it out their doors onto the landing. “Inside the cells are awful, outside is a mess too. The stench is unbelievable. The riot squad are permanently on our landing. They’re dressed in white disposable boiler suits, helmets, boots, and latex gloves. “They’re armed with batons. They tramp through the excrement and urine to hand us meals to be eaten in our cells. It’s a serious health hazard and there’s a real danger of a disease outbreak.” The protesting prisoners claim a BOSS chair – an X-ray-type machine already in Maghaberry – means strip searching isn’t needed and is used only to “degrade and criminalise” republicans. But prison officers insist strip-searching is vital to security and the prisoners’ protest is to blame for the current health risks. McLaughlin claimed the prisoners were locked in their cells 22 hours a day and were sometimes denied food for up to 16 hours. The situation was “at breaking point”, he claimed: “Tensions are at an all-time high. Maghaberry is a powder keg.” Republican inmates are refusing to shave or cut their hair. McLaughlin, a 35-year-old father of two from Ardboe, Co Tyrone, was released last Friday. Emerging from the prison to be greeted by family and friends, he looked like a H-Block blanketman from the 1970s, sporting a bushy beard. McLaughlin, who served two years in Maghaberry for weapons’ possession, was forcibly strip-searched 23 times. He said Colin Duffy – charged with murdering two British soldiers at Massereene – had been strip-searched 76 times. 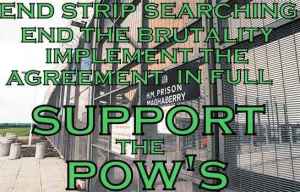 McLaughlin claimed strip-searching was brutal. “One prison officer grabs your head, two others grip your hands, while the fourth holds you down on the floor,” he said. “They tear off your trousers, socks and boxer shorts. They run a scanner over your back passage and genitals. Then, they search your upper body. “After a strip search, you feel like you’ve been in a car crash. Your whole body aches.” When asked why there should be any public concern for men accused or convicted of serious offences, McLaughlin said: “We know many people have no sympathy for us. “Prisoners don’t expect kid-glove treatment. Jails aren’t holiday camps but neither should they be places of inhumanity. The dirty protest was a last resort because we were being treated like animals.

” McLaughlin claimed lights are deliberately shone into prisoners’ cells, or else their doors are banged three or four times a night, to stop them sleeping. The prison service strongly denies allegations of brutality or harassment. The DUP accuses republicans of wanting to “turn Maghaberry into the Maze”.Share
Posted on behalf of Dublin Cumann

7 thoughts on “A Republican on dirty protest in Maghaberry jail claims the North’s top security prison is fast deteriorating into a cesspit of disease.”